﻿
When: 21st - 31st July 2011
Where: Durban, South Africa
Website: DIFF﻿
South Africa’s longest-running film festival, the Durban International Film Festival runs across 12 days at the end of July, presenting over 250 screenings of current films from around the world, with strong focus on South African and African cinema. Screenings take place throughout Durban including township areas where cinemas are non-existent.
I love this time of the year because I get to a diverse range of movies and also support local arts.
I type up this blog minutes before I leave to go and see my first movie of the film festival; The Tree of Life.
Some places showing movies for the festival include; main cinema's such as Gateway, Musgrave and Suncoast. As well as the likes of The Royal Hotel and the Elizabeth Sneddon Theatre.
Some movies that I am realy looking forward to are: Three, Brownian and a Woody Allen movie to close the festival - Midnight in Paris.
The DIFF can be followed on twitter at: DIFF
Also you can follow my updates via LEE FOLKARD. 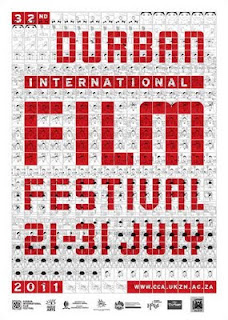 
So what is Instagram and why is it such a huge success? Instagram is an iPhone app that enables the user to snap a photo (or take an existing photo from the phone’s gallery), enhance it with eleven different possible effects, share it on the various social networks, as well as on Instagram itself, which has quickly turned into a social network of its own.

Instead of discussing each one of the features in Instagram, I thought I would take a different approach and point out four things that Kevin Systrom, the developer of Instagram did right, while software giants before him got all wrong.


1. True Social Integration: Instagram has managed to add seamless social integration to sites like Facebook, Twitter, Flickr, FourSquare, and Tumblr. The main difference between this integration and others is that in Instagram’s case, it works perfectly on both a practical and conceptual level. Others before it could not pull it off the way Instagram has.

2. Utter Simplicity: I cannot stress this point enough. If you are a developer, you might want to run a short analysis on all the apps that have gone viral recently. Angry Birds, Flipboard, Cut the Rope, Real Racing, and many more. The common thread that jumps out at me is simplicity. These apps are not overloaded with fancy features and they do not do extraordinary things, they just work. A user can open Flipboard and begin using it without a tutorial. The same is true with Instagram, and that, in my humble opinion, is why the app is so appealing.

3. Simple Photo Sharing: The thing with Instagram and the reason I did not download it the first time someone talked about it on my Facebook or Twitter stream is because I thought it was just another silly photography app for iPhone. There are so many apps out there like Hipstamatic that allow you to enhance your iPhone photos with cute effects. The thing is with Instagram that separates it from the rest is its sharing abilities. Not only can you easily share your Instagram photos on Facebook or Twitter in one simple step, but you can actually build an entire network of friends around your Instagram photos. What Instagram figured out that others before it did not is that people like to create things but even more than that, they like to show them off.

4. Scalability: Now I am no developer and I do not know how to properly handle the issue of scalability when it comes to the viral nature of iPhone apps. Having said that, if you are a developer and you create an iPhone app, you need to be prepared for it to explode. In fact, if you do not think it is going to take off, then why bother creating it? Take the case of Flipboard for example. Mike McCue, the CEO and brains behind the wildly popular Flipboard app explains in an interview that he doubled the amount of servers his developer told him he needed before launching Flipboard. However, with the help of some major Flipboard evangelists, the servers crashed within seconds and they had to implement a registration program to roll out the app gradually to new signups. Instagram has exploded and continues to grow in numbers, yet the app is responsive, robust, and fun to use. No scalability issues to be found.

All in all, Instagram seems to be taking the crown of the next big thing in photo sharing. I am sure we will see the app on other platforms including Android and maybe even Windows Phone 7, but for now, developers should be taking this app as a case study and learning a few very crucial lessons about getting their app to take off the way Instagram has.


Have you tried Instagram yet? What did you think? Please let us know in the comments or reach out to me on Twitter.
Posted by Lee Folkard at 8:31 PM No comments:

It's been a while since I have blogged. Been quite busy with shoots. I have been debating doing another Project 365 - most likely starting in August of this year! But we shall see about that one.

I have been having an awesome time using Instagram! An app for my iPad. A blog will follow within the next week about this amazing FREE app for all those who have an iphone, ipad touch or ipad.

Below find a few pictures from, [ VIVID ]


"There is a pleasure in the pathless woods;
There is a rapture on the lonely shore;
There is society, where none intrudes,
I love not man the less, but Nature more..."

Winner of Project One, Roxi Richards' much anticipated shoot happened yesterday.
A team consisiting of; make-up artist, Jessica Frew ; stylist, Brett Robson ; and myself ; met with Roxi at 08:00. Braving the cold we made the trek of about 30+ minutes carrying all our gear to our starting point.
We had decided to really go wild for our; "Wild Thing" shoot concept.
Sunlight was evident even though the early morning conditions still resulted in an icy chill in the air.

On reaching our desired point of commencement we got going. Make-Up begun and Outfits and Accessories were paired and the shooting started.

What followed shows evidence that when a team of people get together with a common purpose - great results follow. I believe this goes for all things in life. Big or small, teamwork and working with nature, not against it - yields positive results.

Some pictures from the, "Wild Thing" shoot can be found on my facebook page. Comments are most welcome. Keep checking as within the next few days, more pictures will go up.

Once again I would like to thank all involved in the shoot!
Posted by Lee Folkard at 11:39 AM No comments: